As we reach the 1920s, German Expressionism begins to solidify as the aesthetic of horror and expands its reach into other films. During this period, we also saw the rise of horror in pop culture as it became more and more popular with the public. This in turn led to the rise of horror figures like Caligari and Nosferatu, setting up the framework for the likes of Frankenstein and Dracula, then later Michael Myers and Jigsaw. 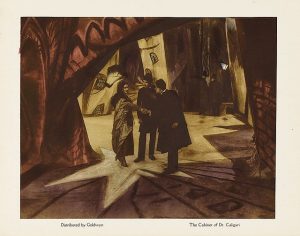 Still from The Cabinet of Dr. Caligari

The Cabinet of Dr. Caligari (1920), is considered the first purely German Expressionist film. Centered on Cesar, played by Conrad Veidt, and Dr. Caligari, played by Werner Krauss, the story follows Cesar as he is hypnotized by Caligari and sent to commit murders on his behalf. The hyper-stylized set is one of the more famous aspects of the film. In a review done by Roger Ebert, he wrote,“[t]he actors inhabit a jagged landscape of sharp angles and tilted walls and windows, staircases climbing crazy diagonals, trees with spiky leaves, grass that looks like knives. These radical distortions immediately set the film apart from all earlier ones, which were based on the camera’s innate tendency to record

reality.” On top of the odd angles and distorted environment, the sets had shadows painted on them, exaggerating the effect. Director Robert Weine also utilized dark lighting that added more dimension to the set. This moody atmosphere soon became the framework for many films and horror films to follow. We can still see this approach to set design today, in films and TV shows like Pan’s Labyrinth (2006) and American Horror Story (2011). This dark style also influenced the Noir genre in Hollywood 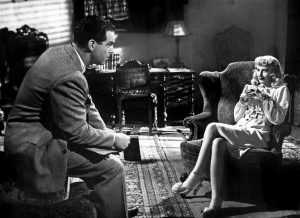 Still of Barbara Stanwyck and Fred MacMurray in Double Indemnity

This set design continued to influence the German film industry and can be seen in possibly one of the most well-known German films, Nosferatu (1922). Centering on Count Orlok, played by Max Schreck, the film unfolds as Orlok soon becomes infatuated with Ellen, played by Greta Schröder, and her very lovely neck. Members of the town begin to die, and their deaths are ruled as a result of a plague, however, Ellen and her husband quickly determine Orlok is the cause and is truly a vampire. With this knowledge, Ellen attempts to distract Orlok by inviting him to her house, hoping to kill him. However, Ellen faints and her husband leaves the house to get a doctor. Orlok arrives and begins to drink Ellen’s blood, unaware of the open window in front of him. The sun rises and with a poof of smoke, Orlok is killed. Ellen’s husband returns, and they embrace before Ellen ultimately dies of her wounds. 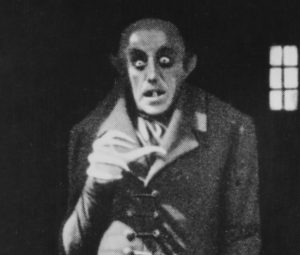 As one of the most recognized horror icons of all time Count Orlok, or Nosferatu, has terrified numerous generations for years. Though many may not have seen Nosferatu, with the help of a special cameo on Spongebob as well as numerous other pop culture moments—from a David Bowie music video to an opera being written about the character—Count Orlok has been in the zeitgeist since his premiere in 1922. However, Count Orlok and the film were almost lost to the world shortly after its release. The film took heavy inspiration from Bram Stoker’s Dracula and Stoker’s estate quickly sued the movie for copyright infringement and won. The court ordered every copy of Nosferatu to be destroyed and, somewhat surprisingly, the court acted quickly and managed to destroy every copy, except for one. This lone copy managed to find its way to America, where it became a part of the public domain, thus making it next to impossible to bring another lawsuit against. From this one copy, Nosferatu’s legacy was saved and continues to be praised, much like The Cabinet of Dr. Caligari, as one of the best silent films of all time. This legacy has allowed Count Orlok to reappear again and again in pop culture, where he even received a remake in 1979 with the film Nosferatu the Vampyre.

Count Orlok’s continued popularity could have contributed to the rise and continued popularity of the Universal Monsters, who would later take over the mantle from Orlok. The Universal Monsters were a group of horror characters that belonged to Universal Studios. These Monsters became incredibly popular, leading to a number of sequels. After Nosferatu’s release in 1922, a year later, the first of the Universal Monster movies was released with The Hunchback of Notre Dame. Later followed by The Phantom of the Opera (1925), both starring Lon Chaney as the titular role. This earlier wave of American horror films were somewhat of a surprised success to the studios. Four more films were released before the 1920s came to an end, The Cat and the Canary (1927), The Man Who Laughs (1928), The Last Warning (1929), and The Last Performance (1929). The latter of which even had The Cabinet of Dr. Caligari star Conrad Veidt as the titular villain; though the film was heavily panned by critics. This first set of monsters helped, with Nosferatu, in setting the stage for the most recognized of the Universal Monsters films. 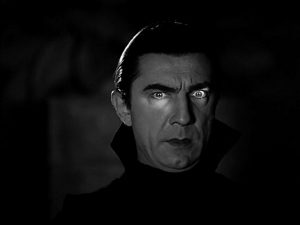 Released February 14, 1932, Dracula, became the first pop horror icon of the Universal Monsters to appear. Draped in gothic and expressionist imagery, Dracula tells the story of Dracula, played by Bella Lugosi, who is wanting to move from his current castle and into a village nearby. Calling on a man named Renfield, played by Dwight Frye, to assist him, Dracula quickly hypnotizes him and attacks him. As the story continues, Dracula soon becomes obsessed with a young woman named Mina. After kidnapping her, Mina’s husband and Van Helsing hunt down Dracula. Once they find them, Van Helsing drives a stake through Dracula’s heart and kills him. This film catapulted Lugosi to stardom, though with the fame Lugosi began to be typecast as a horror villain or only Dracula. As Lugosi’s career faltered, he began to be cast in films for the sole purpose of exploiting his name. Though some of his collaborations with Ed Wood now have cult followings, the same can be said for those films. After a lengthy battle with drug addiction, Lugosi died of a heart attack in 1956 at the age of 73. Contrary to his wishes, Lugosi was buried in one of his Dracula costumes.

While Lugosi’s career was still popular, he was often paired with another horror actor Boris Karloff, who portrayed the Monster in 1932s Frankenstein. Similarly to Dracula, Frankenstein shot Karloff to stardom, where he and Lugosi would have to share the spotlight, much to the actors’ disdain. Karloff and Lugosi’s feud has become somewhat legendary. Karina Longworth lays out the events of the feud on her podcast, You Must Remember This, which can be listened to here. 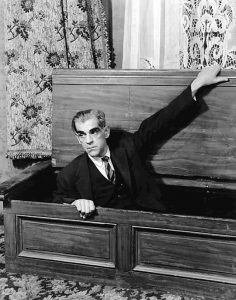 Boris Karloff coming out of a coffin

The first Frankenstein, starring Karloff, follows the story of Henry Frankenstein, who wants to create a human-like creature from other human body parts. After the Monster is created, he escapes and explores the world around him. In a controversial scene, the Monster finds a girl playing by a lake, the Monster plays with her and playfully throws her into the lake. Unaware to the Monster, the child can’t swim and drowns. This scene was later cut due to outrage from audiences, but has been restored in subsequent releases. The film climatically ends with the Monster trapped in a windmill, set ablaze by villagers. Like Lugosi, Karloff reprised his role in numerous Frankenstein sequels, including The Bride of Frankenstein (1935), where he starred opposite Elsa Lancaster, and The Son of Frankenstein (1939). However, unlike Lugosi, Karloff was able to not only embrace his villainous typecasting, but somewhat avoid it. Karloff went on to continued success, narrating How the Grinch Stole Christmas in 1966, for which he won a Grammy, and starring on Broadway in Arsenic and Old Lace in 1941. He would also continue his acting career, going on to have 204 acting credits to his name. Suffering from emphysema, one of Karloff’s lungs stopped working, forcing him to be on oxygen for the remainder of his life. Karloff died in 1969 at the age of 81. 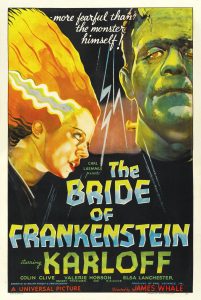 Poster for The Bride of Frankenstein

More monsters of course would come, with RKO’s King Kong (1933), rivaling Universal’s Monsters, as well as The Wolfman, The Invisible Man, and The Mummy joining Universal’s cast of characters. These Monsters and their subsequent sequels would become increasingly popular throughout the 1940s. As these Monsters continued their success, they cemented themselves in pop culture, becoming household names. Even now, these monsters’ continued fame can be seen in merchandise, film references, and continued sequels. Without these icons setting the stage, horror icons may not have received the same fanfare that they do today. This same excitement is now given to the likes of Michael Myers, Jigsaw, and Jason Voorhees. Without Caligari, Nosferatu, and the Universal Monsters, it’s worth wondering if these pop horror icons would still be getting the attention and subsequent sequels that they are.

As we move from the 40s into the 50s we see the continuation and later decline of the Universal Monsters as well as the rise of new ghouls we haven’t seen before. With the invention of TV, a new horror craze sweeps through living rooms, while a new genre of horror will push the limits as to what can be shown in theaters. In part three, we will examine all of this and more.