Joan Crawford: A Life Through Film

Born on March 23, 1904, as Lucille LeSueur, Joan Crawford dreamed of becoming a dancer. Crawford’s life mirrored that of many characters that she would later play. Born to a poor family, Crawford worked her way from school janitor to Hollywood star. This ‘rags-to-riches’ trope appears in a majority of Crawford’s films in the ’30s. For example, in Possessed, Crawford plays Marian, a factory worker, who is determined to make a better life for herself. After a chance encounter with Mark Whitney, played by Clarke Gable, Marian is able to transform herself from working-class girl to rich socialite with his help. Though not quite as overnight as Marian’s transformation, Crawford’s own life became a rags-to-riches story. Fighting her way from janitor, to chorus girl, to body double, to Hollywood starlet, Joan Crawford lived the storylines and tropes of the films she starred in. Though maybe inadvertently, Crawford infused a lot of her own life into the roles that she played. 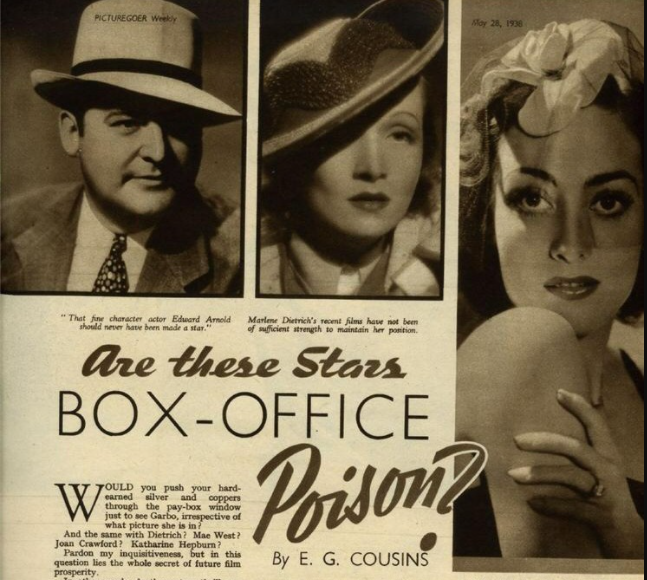 Towards the end of the ’30s, Crawford found herself in a career lull. Labeled box office poison, in a now-infamous Hollywood Reporter advert, Crawford had to come to terms with her place in Hollywood. Though only in her mid-thirties, Hollywood had already begun the habit of undervaluing female stars once they reached ‘middle age’. The previous year, Crawford’s film, The Bride Wore Red, was a box office failure. Finding herself in a new period, Crawford took inventory of her life. In 1939 she divorced her second husband, Franchot Tone—her co-star in The Bride Wore Red—and adopted her first child a year later. Having been a star for over a decade now, she was no longer that working-class girl that she started out to be. Not only had she changed, but the industry was changing as well.

The films made in the ’30s were often made to be escapist. Americans were dealing with the Great Depression and for many, theaters were a place of solace from the outside world. One can see this escapist element throughout many of Joan’s films during this time. Watching common people in institutions like themselves, not only survive extreme poverty, but overcome it, became something that Americans could aspire to. However, 1939 kind of served as the beginning of the end for escapist films. Despite some of the highest quality escapist films coming out at this time, such as Gone with the Wind, Mr. Smith Goes to Washington, The Wizard of Oz, and The Women, this year would serve as a turning point for Hollywood.

From 1940 to 1950, Hollywood began making films that later became categorized as film noir. Often providing a dark and cynical view of the world, film noir quickly became a popular genre, in America. Almost a rejection of the films that came before it, these films depicted a violent and sexually charged world that the films of the ’30s would not. In a Slate article, written by Stanley Crouch, he describes film noir “as an antidote to the Hollywood conventions of pristine character and fulfilled romance because its creators sensed that “rah rah” was no longer the best prescription for the blues. Possessed of a shrewd aesthetic that was both meretricious and rebellious, film noir generously utilized sex and violence, firmly rooting itself in American culture.” These adult themes could almost be seen as a kind of maturing for Hollywood films. Joan Crawford saw the emergence of these films as a possible revitalization for her own career. 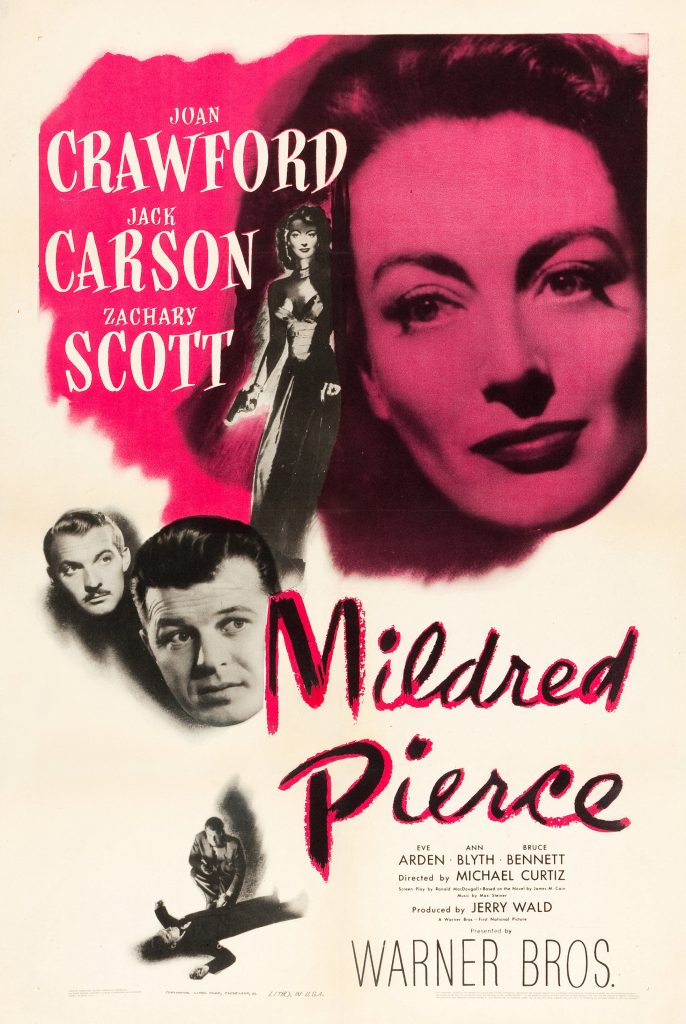 Mildred Pierce is an important film in Joan Crawford’s filmography because it serves as a turning point in her career and her life. Typically playing young, independent, hard-working women in the ’30s, Mildred Pierce, serves as Crawford’s maturation to a career-oriented woman in the ’40s. Mildred Pierce revamped her career, as well as giving her her first Oscar nomination and only win. Also serving as a visual representation of Crawford: transitioning from young Hollywood actress to Hollywood Icon. 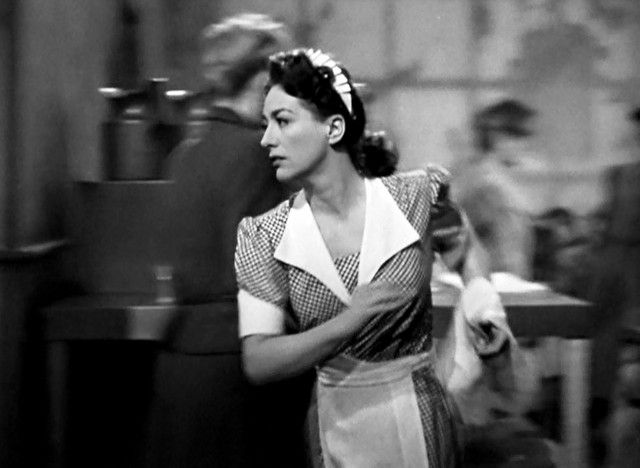 Mildred Pierce uses noir elements from the very beginning, opening on a man being murdered and the unknown assailant fleeing the scene. As the film progresses, it utilizes another noir trope, flashbacks, and narration to show Crawford’s character, Mildred, as she progresses from waitress to restaurant empire owner. Part of its core, Mildred Pierce, is a rags-to-riches story, however, instead of Crawford’s character having to rely on a man to give her wealth, Mildred is able to gain it on her own. This key change is very important because it shows again how Joan used her own life to influence her roles. She of course started as a working-class person but worked her way to where she was very similar to Mildred, having to primarily rely on her own talent to get her there. This transformation became a literal change for her film person. After Mildred Pierce, Joan starred in a number of noirish films, where she played wealthy, older, women. She even went on to be nominated for two more Academy Awards for this type of role. 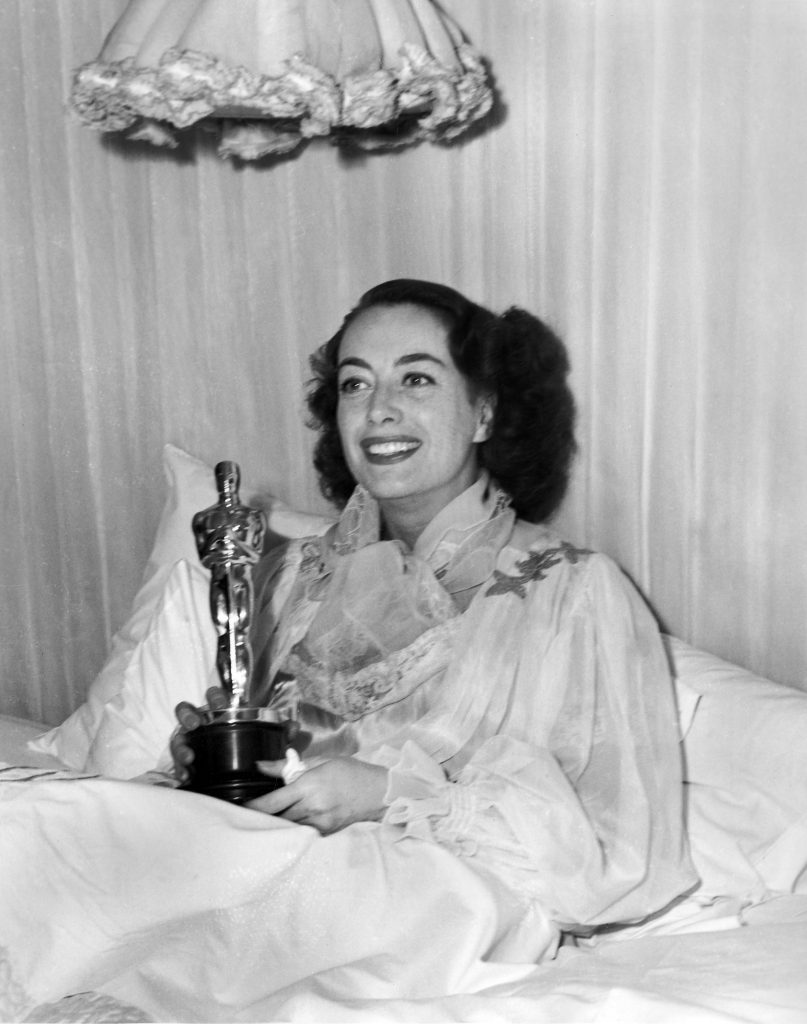 Joan Crawford had a very long and successful career. She would later transform herself again and practically invent a new sub-genre of film, hagsploitation, with Whatever Happened to Baby Jane?. Joan worked in film and later television for twenty-seven more years after Mildred Pierce and had a career stretching from 1925 to 1972. Crawford proved herself to be a shrewd businesswoman and was able to make comeback after comeback for herself until her retirement. Joan died on May 10, 1977.