A Golden Age of Horror Pt 1

While the 30s, 40s, and 50s were a golden age for classic films, the 70s was a golden decade for modern films. Due to the collapse of the studio system and the Hays Code, films were able to be made with fewer restrictions on topics and reduced oversight from producers. This, coupled with a younger audience of movie goers and a larger interest in foreign films, lead to a demand for experimental and nuanced filmmaking. Horror was then allowed to move away from more traditional storytelling elements. This decade can be credited with how a lot of films are made and styled today. Known as New Hollywood, this time has been credited to one film in particular, though not a horror film, this movie helped set the expectation for films in the 70s.

MGM, RKO, Paramount, Warner Brothers, and Fox, also known as the big five, held the largest amount of control over the film industry. These studios had a monopoly on films being released, including theaters. Studios used to be able to purchase theaters, this allowed for them to have control over the production, the distribution, as well as the exhibition of their product. Falling under the definition of vertical integration, this control allowed these studios to stifle any other form of competition. This led to the case US v Paramount, where The Supreme Court found these studios, specifically Paramount, had violated antitrust laws, preventing the sale of their product to outside buyers. With the Paramount ruling, the first blow to the studio system was made. Forcing them to relinquish some of their power and later leading to one of the big five, RKO to close their doors for good. This ruling however was overturned in 2019 and set to expire in 2022.

This as well as the invention of television, lead to the studio systems stumbling. Trying to make up for lost revenue, the studios attempted to capitalize on the spectacle that movies could bring to audiences that television couldn’t. Investing heavily in movie musicals, epics, and big budget films during the 50s and 60s. However, with the changing times, came changing tastes, and movie musicals quickly moved out of fashion. Hemorrhaging money and not able to connect with the public, studios scrambled to try to regrow their audience. 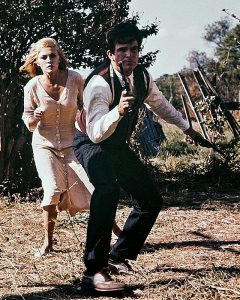 Image of Warren Beatty and Faye Dunaway in Bonnie and Clyde

1967’s Bonnie and Clyde, is a film that most film historians turn to when talking about this time in film history. Known as New Hollywood, this decade is typically viewed as stretching from the late 60s to the early 80s, and defined by films breaking away from traditional filmmaking and storytelling. Specifically choosing to make films that didn’t have stereotypical endings, opting to leave plots without a clean ending, while also focusing on the non-glamorous parts of life. This decision made for a more realistic story, imitating life even in its most sloppy moments. Though believed to be a complete flop, Bonnie and Clyde surprised many by not only launching its two stars, Faye Dunaway and Warren Beatty, to stardom, but by also being the third highest grossing film of the year. The film also won Estelle Parsons her Oscar for best supporting actress. Stylistically, this film breaks from traditional films with its first opening shots, choosing to open with close-ups and medium shots of the main characters, rather than a traditional establishing shot. This was a similar technique that became popular with French filmmakers. While Bonnie and Clyde do things that are bad, the film doesn’t frame them as completely evil, instead the film takes a more Robin-Hood-like-narrative for the two titular characters. Showing a gray morality to what they are doing and even placing them in a sympathetic light. Bonnie and Clyde was also heavily inspired by films from foreign directors, specifically the French New Wave. This style attempted to achieve realism, which can be seen in Bonnie and Clyde. After every gun fight the characters don’t walk away unscathed, instead they limp away with wounds, showing the real carnage that can happen with violence.

Some of the biggest horror films made during this time were heavily influenced by the Italian horror genre Giallo. Known for relying on creative kills and sexually charged scenes, similarly, its American successor duplicated its success and added to it. Slasher films soon blew up and took over the horror genre for years, thanks to the success of Halloween (1978). However the first slasher film is somewhat up for debate. Many consider 1960s Psycho to be the first slasher, while others consider 1974s Black Christmas to be the true first. At the same

time 1967s Berserk! is considered the first American Giallo film and could arguably be a slasher film. Out of the three Black Christmas holds the most archetypal plot points, similar to slasher films that we know now. To briefly describe what the subgenre is, Slashers are a type of murder mystery, where a group of people are slowly being picked off, typically leaving a final girl who either defeats or gets away at the end of the movie.

Happening towards the end of the 70s, Halloween made a large impact on the film industry and defined 70s horror. This impact can still be seen today, with the success of 2018s Halloween and the much anticipated sequel Halloween Kills, coming out later this month. In total there have been thirteen Halloween movies made. The film would also later influence other slashers by their location, character, and killer. In The Monstrous Years: Teens, Slashers, and the Family, Pat Gill writes “the suburban haven away from the cities, not only fails to protect its children, but becomes a breeding ground for living nightmares, unknown to urban areas. In films following Halloween, suburban and small town teens are put in danger again and again, at home, at school, at camp, and on holiday. These films seem to mock white flight to gated communities, in particular the attempts of parents to shield their children from the dangerous influences represented by the city…the danger is within the film seems to say…and the troubling ordeal of being a late-twentieth-century-teenager”. Due to the growing youth movement and the desire to market films to younger audiences, Halloween came at the right time. Because of its success, films like Friday the 13th (1980), Nightmare on Elm Street (1984), and Scream (1996) were able to find similar acclaim.

Of course there were more than just Slasher films in the seventies. Numerous subgenres of horror found great success during this time. In part two of Horror’s Golden Age, we will continue to explore the changing times of the seventies and rise of authorship. Supernatural, art house, and blockbuster horror will also be viewed and the continued success of the Giallo genre as well as director Dario Argento. We will continue to explore this and more.