A Brief History of Horror Films: The Birth of Horror

Editor’s note: This is the first in a series exploring the history of horror films.

From the gothic vampire of Bella Lugosi or the silent Michael Meyers, to the creature in It Follows, horror films hold an important and lasting place in the zeitgeist. Starting in the late 1800s, horror films have given birth to countless subgenres that oftentimes reflect a certain point in history. I wanted to try something a little different with these posts, in order to expand and really track how horror has evolved. We’ll be breaking them into a series, starting with the very beginning of horror in the late 1800s through the silent era, ending in the 1910s. 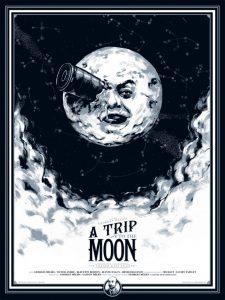 Though the film industry began in the early 1800s, the horror genre officially got its start with Georges Méliès in the 1890s. Méliès was a french director and actor, who starred in the majority of his short films, spearheading the genre with, La Mainor du Diable / The House of the Devil (1896) and The Bewitched Inn (1897). Méliès became a major part of the film industry, which in turn helped his films survive throughout the ages while many early filmmakers’ works would eventually be lost. Although Méliès is credited with the first narrative horror film, his most prominent work to date is A Trip to the Moon (1902). In this film, Méliès showed off his prowess for visual as well as practical effects which he would continue to use throughout his career. 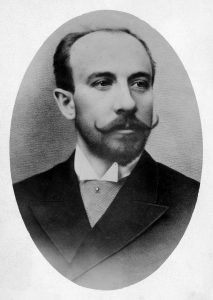 Méliès can also be credited with creating a variety of filming techniques and tricks. For starters, he pioneered the stop trick, which he would do by pausing the camera, causing actors or objects to vanish or transform into something different. This effect can also be seen in Bewitched (1964) when Elizabeth Montgomery’s titular character Samantha wiggles her nose, making objects appear or disappear or even for the whole set to change. Méliès also created the double dissolve effect, where he would film an actor performing a scene, then film over the same roll having the same actor or another actor react to the performer that wasn’t there. This effect can be seen in Harry Potter and the Prisoner of Azkaban (2004), when Harry and Hermione go back in time to save Buckbeak. This innovation wouldn’t stop there, as well as the effects above, Méliès is credited with creating stop motion, the overlapping dissolve, split-screen, and fading in and out effects. Most if not all of these effects are still used to this day. 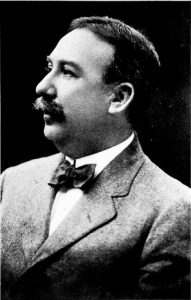 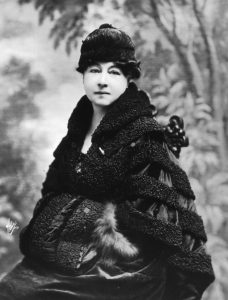 Of course, Méliès was not the only horror filmmaker of that era. Others include Edwin S. Porter, Walter R. Booth, George Albert Smith, and the first woman to direct a film, Alice Guy-Blaché. Faust et Méphistophélès (1903), directed by Blaché, would become the third version of this tale, after attempts by Méliès and Edwin S. Porter. Coming in at only two minutes, Blaché’s version attempts to tell the story all the way through, unlike Méliès and Porter, who made vignettes. It is believed that Blaché directed over a thousand films, a handful being feature-length, but only a few survived. Blaché would go on to publish an autobiography in 1940 and is credited with inspiring the likes of Alfred Hitchcock and even Albert Einstein. In 2003 Blaché’s film, Matrimony’s Speed Limit (1913), was selected to be preserved in the Library of Congress.

As we reach the 1910s, horror films began to solidify the aesthetic that is still used to this day: German Expressionism. On The Art Story, they surmise Expressionism as “emerg[ing] simultaneously in various cities across Germany as a response to a widespread anxiety about humanity’s increasingly discordant relationship with the world and accompanying lost feelings of authenticity and spirituality. In part a reaction against Impressionism and academic art, Expressionism was inspired most heavily by the Symbolist currents in late-19th-century art. Vincent van Gogh, Edvard Munch, and James Ensor proved particularly influential to the Expressionists, encouraging the distortion of form and the deployment of strong colors to convey a variety of anxieties and yearnings.”

Just as the popularity of Expressionism rose, World War I began, prompting the German government to ban foreign films from playing in German theaters. This, mixed with a high demand from German audiences, forced film studios to increase their output from 25 films in 1914 to over 100 in 1918. This high demand came from German audiences going to the theater in droves due to inflation and many of them viewing their money as worthless.

However, as the war continued, German audiences’ tastes shifted, on the site Movements in Film they note “German audiences had become less preferential towards romance and action flicks since the beginning of WWI, and themes of violence, cruelty and betrayal become more relevant topics for discussion.” This transition mixed with Expressionism and led to the German Expressionist film movement, which launched the careers of Fritz Lang, who would go on to make Metropolis (1927), and F.W. Murnau, who would go on to create Nosferatu (1922). Though reaching its height in the 1920s, German Expressionism can still be seen in modern horror films to this day. 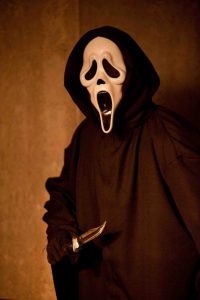 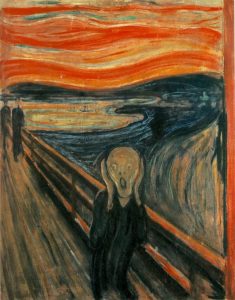 For instance, in order to show ‘true’ emotion, Expressionism would often distort or exaggerate faces and colors to achieve this. This can be seen in one of the most popular Expressionist paintings, Edvard Munch’s The Scream. With a vibrant, somewhat, foreboding background and the distorted face of the subject, The Scream exemplifies Expressionism in every aspect. This distorted figure can later be seen in monsters and killers in future films. The main killer, Ghostface, in the Scream (1996) series is the perfect example of this Expressionist influence, looking almost exactly like Evard Munch’s painting. Dark and moody lighting also became a prominent aspect of this type of film, adding to the distortion and heightening the emotional response of most viewers.

As the 1910s ended, as well as World War I, Germany quickly became a prominent figure in the international film market. Many of their films later became immensely popular and influenced Hollywood. The birth of the horror genre can be attributed with great breakthroughs in the film industry, many of these breakthroughs still used to this day. In part two we will examine the height and continued influence of German Expressionism as well as the beginning of Pop Horror in Hollywood with the Universal Monsters.