The 1950s brought in a new transitional period for entertainment and for Hollywood. The popularity of television swept through the nation, the fall of the studio system was around the corner, and the aftermath of World War 2 transformed America. Television brought a new type of horror into the living room with family-friendly programming like The Addams Family and The Munsters. Reruns brought continued success to the Universal Monsters, as well as creating a new subgenre of horror Creature Features. This new form of broadcasting allowed for younger audiences to be reintroduced to golden age stars, revitalizing some of their careers. In film a new type of monster was introduced and sent a ripple effect through the entertainment industry. In other parts of the world, their take on horror would also affect the genre and set up the seventies to be one of the most pinnacle years of horror films.

TV allowed for the introduction of new iconic horror characters, like Vampira, the Munsters, and the Addams. The Addams Family became the most recognizable out of the bunch, with The Munsters and Vampira becoming more cult symbols. 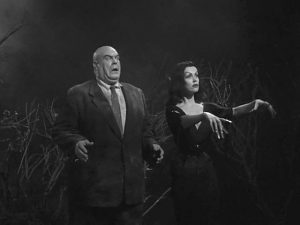 Vimpira in a scene for Plan 9 from Outer Space

Vampira, or Maila Nurmi, became the first film movie hostess on TV. Vampira would host her show for about two years, until it was canceled in 1954. Nurmi would go on to open Vampira’s Attic, where she would sell antique items as well as handmade jewelry. Nurmi tried to reboot her show in the ’80s, though with her as a producer and not as the iconic character. The studio she was working with went behind her back and hired Cassandra Peterson. Nurmi instead wanted to hire Lola Falana, but the studio decided against it, mainly because Falana was black, believing no one would tune in for a person of color. After this, Nurmi left the production, no longer allowing the studio to use the name Vampira. Because of this, the studio renamed Cassandra Peterson’s character, who became another iconic character of horror, Elvira. 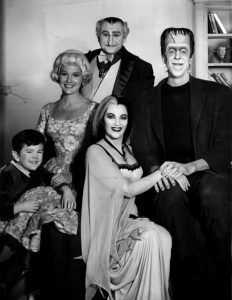 Promotional photo of The Munsters

The Munsters was originally submitted as an idea in the mid-1940s to CBS as a cartoon series. Though it would sit until the early 60s when a similar idea was submitted to ABC. Later the Munsters would be further developed by Leave it to Beaver head writers, taking a satirical approach to suburban life as well as classic horror films. The Addams Family was created in 1938 originally as a series of cartoons for the New Yorker. When the TV series began, the original cartoonist decided to stop publishing comics, since he didn’t want to cheapen his characters. Both series would only run for two seasons, with The Munsters clocking in at 72 episodes, and The Addams Family running for 64. The Addams of course have lived on in numerous film adaptations as well as television remakes, while The Munsters have largely been remembered for their original run, though a TV movie was made in 2012 starring Jerry O’Connell as Herman and Portia de Rossi as Lily. In addition, The Munsters theme song served as inspiration for Agatha’s theme song in Wandavision.

Towards the mid-1950s, Universal came out with one of their final Universal Monsters, The Creature from the Black Lagoon. The Creature would go on to have two sequels and mark the end for the Universal Monsters in 1956. There was an attempt to reboot the Universal Monsters in the late 90s, after the success of The Mummy (1999), though this ended in 2017, ironically with The Mummy starring Tom Cruise. These monsters would however continue to live on through reruns on TV, where they continued to secure a place in pop culture. These reruns would also feature films from all over the world, with movies about giant mutated monsters attacking cities. This genre created the Creature Feature subgenre of horror. This genre is still semi-active today with the new Godzilla movies being released as well as 2018s The Meg.

With the invention of television, came the possibility for audiences to rewatch older movies, which in turn allowed for a reintroduction to many stars. This created a slight demand for these actors and allowed for them to have another career high. With this, a new subgenre of horror was created, Psycho Biddy, or Hagsploitation. This genre of horror took once A-list female stars and would exploit their name in order to make, oftentimes, cheap horror movies. 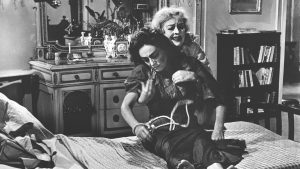 The first of which being Whatever Happened to Baby Jane (1962), starring Bette Davis and Joan Crawford. The making of this film and Davis and Crawford’s relationship has of course become infamous and even turned into a highly historically inaccurate tv series, Feud, starring Susan Sarandon and Jessica Lange. A more accurate telling of their relationship can be found on the youtube channel Be Kind Rewind, here as well as here. Whatever Happened to Baby Jane, created numerous knockoffs afterwards, such as Hush Hush Sweet Charlotte (1964), starring Bette Davis and Olivia deHavilland, who replaced Crawford after some difficulties, What’s the Matter with Helen? (1971) Starring Debbie Reynolds and Shelley Winters, and The Nightwalker (1964) starring Barbara Stanwyck. This subgenre has largely gone stale after the 1970s, though 2018s Greta could easily be categorized as such. 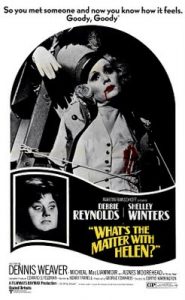 Poster of What’s the Matter with Helen?

This genre, though problematic, gives us an interesting insight into many aspects of the entertainment industry. Firstly how the older women were and are viewed to the industry. Though the majority of these stars were only in their mid thirties to early fifties, the industry viewed them as being past their prime. This genre largely capitalized on this view point as well, centering the majority on these women going insane because they are no longer wanted. The industry itself has largely remained unchanged, many films starring ‘older’ women or telling stories about those women are largely underfunded or shelved for years, before being made or not at all. Most recently Glenn Close talked about this when promoting her film The Wife (2017), “Close told the roundtable it took 14 years to get the film made, saying, ‘It was….hard to find actors who wanted to be in a movie called The Wife….[n]o one wanted to it and, most of the money, if not all the money, came from Europe.”

What really defined this period of horror was the introduction of The Night of the Living Dead (1968), 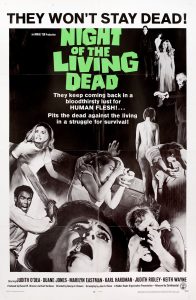 Poster for Night of the Living Dead

by George Romero. The first film to introduce the world to zombies doesn’t even refer to them as such. Instead, the creatures are referred to as ghouls throughout. While this film also introduced us to a new monster, the film broke boundaries, by casting a black lead. Coming out in 1968, this colorblind casting caused controversies and outrage. Though Romero said it was completely unintentional, simply choosing Duane Jones because he was the best actor that auditioned. 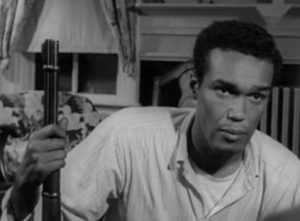 Duane Jones in Night of the Living Dead

This casting choice also gives the ending of the film another meaning. After surviving the night from hoards of ghouls, Jones’ character believes he will be rescued the following morning when police officers arrive. However, uncertain if he is a ghoul or not the police officers shoot and kill him, without attempting to see if he is still human. This act of violence at the end was shocking. In an article remembering Jones, they write “One might say that these white officers do not recognize Ben as human, but one could also say that they recognize him as that which they have long recognized as subhuman.” Racism plays a large part in the film, with the other characters Jones is protecting, constantly using microaggressions against him. In one scene in the film, Marilyn Eastman’s character Helen, complains about how hot it is in the house, but insists that she doesn’t want to remove her jacket. This scene implies that Helen feels uncomfortable removing her jacket around Ben, implying that since he is black, he would not be able to control himself. Ben continues to receive these racist remarks, even though he is the reason they are still alive.

Duane Jones only starred in eight films, with Night of the Living Dead being his first. Of the other films Duan Jone starred in, Ganja and Hess (1973) is probably his other most recognized and a must see.Predominantly a stage actor, Jones starred and directed a number of stage productions. Jones even oversaw the literature department at Antioch University. Sadly Jones passed away of a heart attack at the age of fifty-one.

As horror continued to evolve, the subgenre Giallo helped transform and set up horror for one of its pinnacle years in the 1970s. Giallo, pronounced jallo, means yellow in Italian. The term became associated with pulp novels in the 1920s, which typically had a yellow background. Similar pulpy undertones, typically being extremely sexually charged and violent, are a staple of the genre. The first Giallo film is typically credited to The Girl Who Knew Too Much or The Evil Eye (1963) 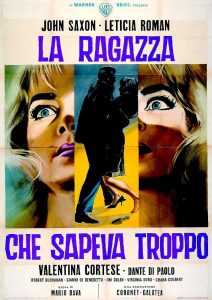 Poster of The Girl Who Knew Too Much

, though the first Giallo novel to be adapted was The Postman Always Rings Twice. The genre featured creative kills and pushed the bounds on gore, as well as shady mysterious killers whose identities were not revealed until the end or not at all. These tropes can later be seen in the slasher genre.

Moving from the 50s and the 60s into the 70s, we see a golden year of horror in America. Iconic characters like Michael Myers, Jason Vorhees, and more, have their first film appearances, launching numerous film series and giving a new generation their own iconic group of characters. In part four, we will examine this and more.