During the last week in September, libraries will be participating in Banned Books Week. This week was created to raise awareness of censorship and to highlight books that are frequently challenged and sometimes banned. In 1982, after an onslaught of challenges and bans, Judith Krug, the Director of the Office of Intellectual Freedom for the ALA, created the week. As a fervent supporter of the First Amendment, Krug believed that libraries should not censor the materials that they carry and that it was in fact a disservice to do so. Krug pushed for laws that would keep all library patron’s information private, especially pertaining to what they checked out. Like Krug, libraries all over our nation hold to these same principles and believe in the importance of information for everyone and pushing against censorship.

This year is the 40th anniversary of Banned Books Week. From August 15th to September 30th we will be celebrating Banned Books Week and highlighting some of the books that have been banned this year and in the past. 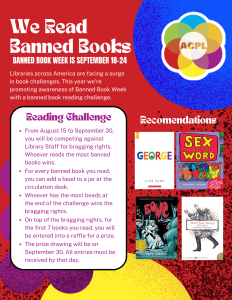 Some Banned Books available at ACPL

All Boys Aren’t Blue by George Johnson (YA non-fiction)

Anne Frank: The Diary of a Young Girl by Anne Frank (non-fiction)

Bless Me, Ultima by Rudolfo A. Anaya (fiction)

The Catcher in the Rye by J.D. Salinger (fiction)

Draw Me a Star by Eric Carle (picture book)

Eleanor and Park by Rainbow Rowell (YA fiction)

The Hate U Give by Angie Thomas (YA fiction)

The House of the Spirits by Isabel Allende (fiction)

In the Night Kitchen by Mauric Sendak (picture book)

Of Mice and Men by John Steinbeck (fiction)

The Things They Carried by Tim O’Brien (fiction)

To Kill a Mockingbird by Harper Lee (fiction)

Sex is a Funny Word by Cory Silverberg (juvenile nonfiction)