A Golden Decade of Horror pt 2

Time and time again, the 70s continued to produce films that not only informed what future cinema would look like, but made films that are now considered iconic. From Brian De Palma’s Carrie, to George Romero’s Living Dead series, films made during this decade made a large impact on the film industry as a whole. With New Hollywood embracing creative risks, as well as authorship becoming more commonplace, horror moved into a new and exciting direction. The Giallo genre continued to have success, with possibly one of its most recognized films, Suspiria, and art house films, as well as avant-garde cinema, found their moment with Eraserhead.

During this time, the Italian film industry was more of an imitation game, though all cinema could arguably be. In The Italian Cinema Book, Mikel Koven quotes Luigi Cozzi “In Italy…when you bring a script to a producer, the first question he asks is not ‘What is your film like’ but ‘What film is your film like?’ That’s the way it is, we can only make Zombie 2, never Zombie 1”. It took Giallo a long time to find itself and what other films it was like. First starting in the 60s as an evolved version of the Italian Gothic subgenre, Giallo slowly continued to find itself through the years. Capitalizing on the success of Alfred Hitchcock, 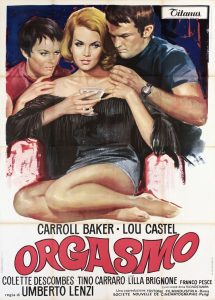 Umberto Lenzi made three psychological thrillers Orgasmo 1969, So Sweet So Perverse 1969, and A Quiet Place to Kill 1970. Other directors, such as Lucio Fulci, Giullio Questi, and Michelangelo Antonioni all 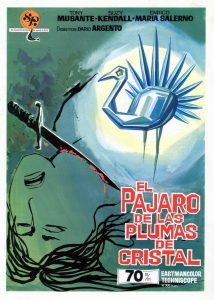 Poster of 1970 film The Bird with the Crystal Plumage

added their own interpretations to the genre, all to varying success, but never bringing it from outer obscurity.

Mario Bava is considered the first director to make a giallo film with The Girl Who Knew Too Much 1963. He went on to make Blood and Black Lace in 1964 which established some key elements that would be seen over again in the genre, such as a disguised killer with a chosen weapon. “While the giallo struggled to find its feet as a film genre, one film emerged in 1970…The Bird with the Crystal Plumage. Its success not only announced the true arrival of giallo in cinemas around the world, but also heralded the advent of its young director as a significant player in horror cinema” (Koven, 205). While the previous directors mentioned made great impacts in the giallo genre, Dario Argento is considered the true king of the genre.

Argento helped birth giallo, by combining elements of popular horror films from before it, as well as popular American films. “[Argento]…established one of the central themes of giallo cinema: the ‘eyewitness account’” (Koven, 205). Typically, through the narration of an amateur detective. This style can be seen in the ever popular American Noir genre, which itself took its aesthetic heavily from the father of the horror genre, German Expressionism. These elements set up the framework for tried and true stories that could later be rewritten in the giallo style. As it developed, giallo drew heavily on its pulp roots, beginning to incorporate gory kills and sexual trauma. Giallo “tend[s] to explore sexual trauma in the early life of their killer protagonists. …These films depict a world permeated by pop-culture psychology. Everyone knows a little Freud, enough…to pat psychoanalytical explanations of the killer’s often sexual deviancy…[these] motives also enable[d] the films to blend as much nudity with violence as local censors [would] allow” (Koven, 206). This genre then evolved into the American Slasher genre, where it took similar elements as the masked killer and sexual deviancy, and established itself with films such as Halloween (1978) and Friday the 13th (1980).

Argento would go on to direct the now cult classic, Supiria in 1977. Upon its release Suspiria, was met with mixed reviews. Janet Maslin of the New York Times wrote, “[Suspiria] does have its slender charms, though they will most assuredly be lost on viewers who are squeamish.

The plot, as transparent as the pane of glass that slices up the movie’s first victim, is intentionally ridiculous, and Mr. Argento’s direction has the mocking, stylized simplicity of a comic strip”. Most reviews commented on the level of gore that the film had, as well as how visually striking it was. Before it could be released, Argento had to make cuts to the film, cutting up to eight minutes in order to get an R-rating in America. Suspiria ended up being commercially successful, even going on to become one of the highest-grossing films for 20th Century Fox that year.

As a whole, Suspiria is a visually striking film to watch. Argento’s use of color goes against the traditional horror aesthetic that German Expressionism established with dark shadows and dim lighting. Instead, the aesthetic is more of a Neo-Expressionist style. Theartstory.org describes Neo-Expressionism as “depict[ing]…subjects in an almost raw and brutish manner… [using] intense colors”. Argento’s use of these colors creates a captivating experience. With looming sets made of primary colors, as well as intense lighting, Argento holds the audience’s attention in suffocating large pink rooms and the endless black of night. Suspiria is one of those horror films that you truly have to watch to experience.

While Italian Cinema drew from the success of Hollywood directors, Hollywood found itself going through a change. The rise of auteur directors reshaped how films were made and the role of a director. These auteurs valued their own vision, striving to have their creative mark over how the film looked and was made. Peter Bagdonivich, Brian De Palma, John Cassevette, and David Lynch can all be labeled as auteur directors. De Palma and Lynch, both left their mark on the horror genre during this time with Carrie and Eraserhead. Though both films fell into different production categories, Carrie falling in line with the blockbuster films that later went on to define the late seventies and eighties, while Eraserhead evolved more as an art house film. 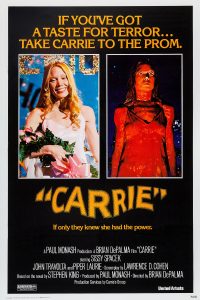 As Stephen King’s first novel, Carrie wasn’t a smash hit, though it sold a moderate amount. The novel wouldn’t become popular until it came out in paperback in 1976, when the film version was also released. De Palma’s Carrie had a relatively easy production. Sissy Spacek was cast as Carrie, after her husband, Jack Fisk, convinced De Palma to do so. The film received a budget of 1.8 million dollars and production went relatively smoothly. Upon its release Carrie, grossed about 3.8 million dollars in its first nineteen days, later going on to make 14.5 million in rentals over the following two years.

Carrie stands out from the traditional horror movie story, by exploring the character that could easily be identified as the antagonist and giving depth and empathy. While so many horror movies of this time gave the antagonists simple motives like sexual depravity or simple desire to kill, you watch as Carrie is pushed to her point of violence. Carrie is othered by almost every character throughout the movie. In the very beginning of the movie, when Carrie gets her period in the locker room showers, she asks for help and is met with tampons being thrown at her and while being mocked. Her mother continuously views her as evil and wicked for wanting to better understand the world. This all culminates to the one night where she finally feels like she is being accepted by her peers to getting a bucket of pig’s blood dropped on her head. What makes Carrie last as a movie is the ability to identify with her, most people at some point in her life have felt othered and ostracized. While her breaking point ends in horror and tragedy, there is a small part in everyone’s mind that says good for her.

In Heaven, Everything is Fine

Setting the tone for his projects going forward, Lynch’s Eraserhead is a cult classic for many film fans and a must-watch for fans of the director. The film garnered much scrutiny upon its release, however, it steadily garnered more fanfare when it began to be played on television. The film itself has a very interesting production history. Falling more in line with art house cinema, Eraserhead took a long time to film, 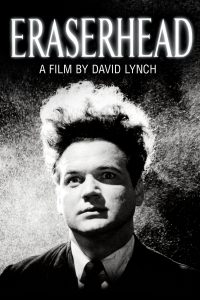 mainly due to lack of funding. Lynch, his assistant director Catherine Coulson, Lynch’s childhood friend Jack Fisk and his wife Sissy Spacek, all gave money to the production in order to keep the film alive. Starting production in 1971, Eraserhead wouldn’t come to theaters until 1977. Due to his dedication to the project, lead actor Jack Nance kept his odd hairstyle throughout the entirety of those six years.

Many reviewers have given their own interpretations on what the film is about, from fears of fatherhood, to unsafe sex, to abortion. Lynch has remained quite on the subject, instead choosing to redirect the question back to the person asking.

As a surrealist horror film, Eraserhead could be a movie with or without meaning, depending on who watches it. Similarly to Suspiria, Eraserhead’s use of design creates another sometimes suffocating atmosphere. Shot in black and white, Lynch uses dark extreme sets mixed with looming industrial landscapes to isolate the main character, who seems to wonder through their world completely disconnected

from it. Like most of Lynch’s project, it has an underlying whimsical element that is somewhat comical while also making you think what the hell? If anything, Eraserhead should be watched for the set and sound design. The film easily takes you on a journey of the senses, gliding you through each visually intriguing scene.

The 70s was an incredible decade in horror, in these past two posts we touched on only a small number of iconic films that came out. However, as we move on to the 1980s and beyond, we will examine the rise of blockbuster films and the decline of slashers films. The slasher revival in the 90s with Wes Craven, as well as the rise in popularity of the found footage horror film with The Blair Witch and Paranormal Activity. 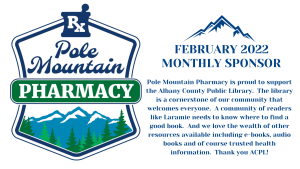